When is a draft manuscript ready for feedback?

Writers ache to share their literary darlings with others, but therein lurks danger. To the writer, those first few chapters—or even a first full draft—are loaded with the sparkle of a rough-cut gem. But that’s not how an unskilled test reader will perceive it. Much of its strengths still remain in the writer’s imagination, in what Ann Lamott calls The Shitty First Draft, in her witty essay of that title. What will stand out like inflamed scars to a spouse or friend are grammar issues, a bumpy story flow, and characters lacking dimension. And there will almost certainly be too many words, or not enough, or not the right ones—because it’s a DRAFT. Only a skilled fellow writer knows enough of the craft to assess it as such. And even then, she or he may be challenged to find the positive in a piece so newly hatched that its problems override its potential.

SO, take a deep breath, gulp down the desire for approval, and get back to work. Accept that writing is a lonely process and, as scholar/writer Robert Graves said: There’s no such thing as good writing. Only good rewriting. Put that piece through its paces before you show it to anyone! Finish a full draft from start to finish. Rework it. Read it aloud to yourself, which forces you to focus on every word. Rework it again. 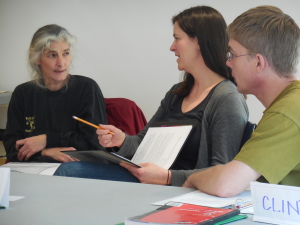 Diana Shallard, Dionne LaPointe-Bakota and Clint Young review each other’s writing in a critique session in a Scribes class.

Now you’re ready for a reader—who should not be a spouse or friend! Find a fellow writer to exchange chunks of writing with, someone with experience giving feedback. Or look for a writing group. Many communities have such groups, but if not join one online. (Try Writers Digest Magazine for listings.) Make sure the group has ground rules. Check my blog post about writer’s groups: http://thescribes.ca/guidelines-for-a-successful-writers-group/.

A professional review will cost $800+, depending upon length, because it takes significant time for a careful read and insightful assessment. It’s prudent to save that investment for the penultimate version, when you’ve smoothed out all the bumps and warts.