A Stellar Example of a Memoir with a Focused Theme

Every writer hopes their book will be in print a decade after its release—but that’s not often the case—especially with local history memoirs. The first edition of Totem Poles and Tea did not get off to a promising start, thanks to a drab cover and its incongruous title, but Hughina Harold’s clear, focused writing—and great stories—triumphed and the book continues to be read.

Hughina’s subject is the two years she spent in the combined job of school teacher and nurse in the isolated Kwakwaka’wakw village of Miquimlees, on Village Island, from 1935-7. She recognized from the start this experience was unique and many years later used her detailed letters home as the basis of this memoir.

Hughina was in her early twenties when she accepted this job, a middle-class girl from Victoria, freshly graduated from nursing school, with the added benefit of a teaching certificate. It was the Depression and work was scarce, so Hughina took the job, though she had no idea what it entailed. She found herself on a remote stretch of coast, accessible by intermittent boat service, teaching children who spoke halting English, and caring for sick and elderly people without access to even a radio-phone for emergencies.

The strength of this memoir is its clear focus. This is not a portrait of Hughina. Nor does it attempt to be more than a superficial introduction to the Kwakwaka’wakw people she served, from whom she was separated by language and culture. The emphasis here is on a unique way of living, predicated upon the whims of deep isolation, tides and weather. Hughina hooks readers with her central question. Will this young city girl adapt—or collapse—as she faces challenges she’s ill equipped to handle?

Mikell Callahan  and Bridget Hill in front of the remains of a former communal house at Village Island, 2015. Photo courtesy Dennis Schotzko.

This is a greenhorn’s journey, related with humour, tension and empathy, as Hughina tackles daily challenges. It’s also a portrait of the many extraordinary people Hughina met, and came to admire. Primary among her new friends were the two elderly Anglican missionary ladies—prim Miss Dibben and deaf Miss O’Brien—who provided room and board in their frigid, ramshackle floating home on the beach in front of the aboriginal village. At high tide it lay flat, the waves lapping beneath, but at low tide it was stranded on the tilting beach. In the worst of winter rain, the “little brown house” leaked, as a counterpoint to Hughina’s sorrow over its lack of hot water bathing. 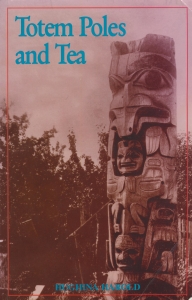 This was the first cover for Totem Poles and Tea. It’s a terrific example of what not  to do in book design.

Hughina makes effective use of as-remembered dialogue to bring these people to life. She does so in a way that’s both convincing and enlivening, though regrettably she wrote the Kwakwaka’wakw people’s English-speaking accent in dialect, which falls flat. What might the handlogging families she met have sounded like if she’d opted to give us their dialogue in dialect too?

I found my first copy of this book in a remainder bin, purchasing a book I would have otherwise ignored. It immediately found a special place on my library shelves, as a compelling portrait of life on this coast in the 1930s. Happily it has since been spruced up with an attractive cover that continues to ensure it finds the readers it deserves.