A New Draw for a Free Manuscript Review has been Launched!

Jane Wilson’s plans for retirement from a high stress social services job included writing. It’s in her blood. Her older sister Jocelyn Reekie has several books in print and Jane’s an avid reader. But two years passed by without any headway. (Sound familiar?) There’s her acreage in Saskatchewan’s Qu’Appelle Valley, quilting, the odd round of golf, her grandchildren and her critters to fill Jane’s time. Meanwhile, her ideas for a historical fiction piece kept brewing. She had a complex tale in mind, with intriguing characters to match. The problem was: Where to start—and how.

A second contest for a free manuscript review  (up to 6,000 words) is now on offer. The names of the next 100 people to sign up for notices for our blog posts will be entered in the draw. The value of this prize is $300.

Jane looked for guidance on the internet and found The Scribes website. She signed up for our blog, which enrolled her in a draw for a general manuscript review. And she won. 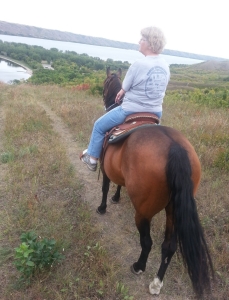 Jane Wilson and one of her ‘critters,’ in the novel-inspiring Qu’Apelle Valley.

Coaching tip #1: an external deadline is a forceful task master.

Four months later Jane had her story launched, tracing the multi-generation impact of fractured lives upon her protagonist’s fate, a tale loosely based on her own family history. Her thematic question: Can her main character learn from the past to effect change?

I gave the opening pages of Jane’s manuscript careful reflection. My task was to focus on story structure, characters and storytelling devices.

“At this stage, what you need is oversight,” I advised Jane. “The pesky details of grammar and sentences comes later, after you’ve finished and revised a first full draft.”

I provided Jane with in-text observations, info sheets, and a five page report, looking at strengths, challenges and resolutions.

For a professed newcomer to creative writing, Jane had accomplished a lot. She opened with a dramatic scene and provided cinematic descriptions of lead characters, allowing readers to come to their own conclusions about the nature of these people and how their lives might unfold.

Jane found my notes about areas of possible reader confusion helpful. They were the result of a backward flipping story flow. She had adopted a narrative arc that’s common in film, but requires a seasoned writer to accomplish in print.

“WOW! You have really given me excellent information and caused me to really think about my writing, both in what I have written and where I am going with it.,” wrote Jane. “I am so fortunate to have won your contest and truly can’t tell you how helpful your comments are.”

The next step for Jane is to probe her summer reading, picking apart the structure of some master works. Meanwhile she’ll write biographical sketches for each of her lead characters and she’ll play with ideas about how to make her story move forward with clarity.

Coaching tip #2: A pre-planned story outline, and thoughts about its overall theme, make it easier to get started–and to keep writing.

Coaching tip #3: Get to know your characters intimately. You’ll know how they’ll act/react as the story unfolds. And, as always, writing makes us think more deeply so you’ll get new plot ideas and story focus.

We look forward to seeing more writing from Jane in future!

Perhaps you need external oversight too, from a trained professional? Call us. Manuscript review and coaching tips are our specialty!